Tesla Coil at the Griffith 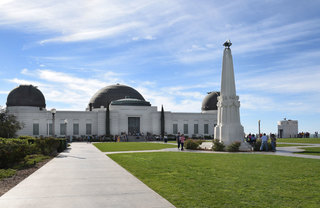 Of all the landmarks around the apartments for rent in Los Angeles, the Griffith Observatory stands out as one of the most well-known and memorable to visit, not least of which because of its incredible views. We’re not just talking about those views of the city, either. Located within the observatory proper, there are all sorts of cool exhibits, like the Tesla Coil located in the Wilder Hall of the Eye. What exactly makes this such an intriguing sight, and what other wonders does the observatory hold? That’s exactly what we’ll be exploring today as we forge ahead.

What in the World Is a Tesla Coil?

Why would a Tesla Coil be of any interest? Just think about what these amazing devices were designed to do. Designed by famed 20th Century inventor, Nikola Tesla, the Tesla Coil is truly a versatile wonder:

“The first system that could wirelessly transmit electricity, the Tesla coil was a truly revolutionary invention. Early radio antennas and telegraphy used the invention, but variations of the coil can also do things that are just plain cool — like shoot lightning bolts, send electric currents through the body and create electron winds.”

A few more fun facts about the Tesla Coil include the fact that it’s been around since 1891, the simple design is easy enough for an amateur to build a functioning model, and that the invention of the Tesla Coil truly solidified the man’s reputation as a “mad scientist.”

Alas, the dream of a wireless network of electricity still hasn’t come to fruition. Nevertheless, Tesla’s invention remains a testament to his genius, and you can catch it on full display at the observatory.

The Tesla Coil and Exhibits at the Griffith Observatory

Now, while it’s true that the Tesla Coil was first built in 1891, the model on display at the Griffith Observatory didn’t get there until 1937. It was previously in the possession of Dr. Frederick Finch Strong, a physician and instructor at Tufts University (in Massachusetts).

Strong used the device because if its ability to generate electric currents, currents that were central to his medical practice and research. Eventually, however, he donated his coil to the City of Los Angeles, and it became a display item at the Griffith Observatory, where it remains today.

You’ll find the coil, along with several other exhibits, throughout the exhibit areas at the observatory, which can be found on the main level, roof, and even the exterior. Be sure to explore next time you’re at Griffith Observatory — you never know what other cool gadgets from the past you might find there!

If you want a place to call home as you explore the many curiosities you’ll find within the City of Angels, there are few communities as fine as The Madrid on the Westside. Here, you can enjoy what urban life has to offer you at a more relaxed pace, while basking in a convenient city location that puts all the best of LA right within your reach. Learn more today, then get ready to experience the city’s grandeur from a whole new perspective.