Take A Trip to the Sunken City 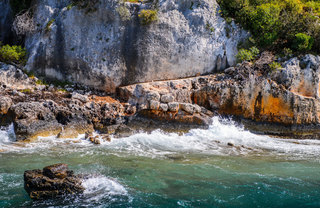 If you’ve spent any measure of time at all living at the apartments for rent in Los Angeles, then you’ve at least heard tales of the so-called “Sunken City,” the area of San Pedro where a powerful landslide in the late-1920s caused an entire beachside development to fall into the Pacific Ocean:

“In 1929, a landslide in San Pedro, California, caused a neighborhood of exclusive homes to tumble into the ocean. At its peak, the land movement was measured at an astounding 11 inches a day. During the slide, part of the adjoining Point Fermin Park also fell into the ocean.”

In the time since this disaster, the area has been closed to the public — officially, that is. Risking peril, more than a few intrepid urban adventurers have braved the dangers to take a peek at what now lies at this coastal ruin. Today, we’ll be going over a few points of interest that they’ve discovered, providing a bit of detail on what the Sunken City is like in the present day.

What Awaits at the Sunken City?

First and foremost, we should include the disclaimer that the Sunken City, at present, is off-limits to the public. Stepping foot on the grounds isn’t just trespassing, either — it’s dangerous. There have been numerous incidents of explorers losing their footing and falling straight into an early grave here, so every step on this abandoned property is done at one’s own risk!

That being said, there are a few intrepid souls who have ventured to the Sunken City and recounted their tales of what they witnessed. Instead going through the hassle of sticking your neck out at the scary, landslide-prone ruin, you can just read up on what others have found during their explorations.

After penetrating the flimsy gate separating people from the site of Sunken City, the very first things you’ll probably notice are the precarious geography and rather picturesque ocean views. In its current state, Sunken City is still slowly falling into the sea, so the occasional landslide will sometimes change the look of the numerous hills and cliffs in this area. What’s more, these particular hills and cliffs are eerily barren, with little in the way of vegetation, save for a few shrubs and palm trees.

If you’ve ever wondered what a community might look like after an apocalyptic event, this is one of the closest things you’ll find to it in this part of Southern California. You might well swear a bomb leveled the Sunken City just by glancing at it, and, with the destructive capability at mother nature’s fingertips, it may as well have.

There’s not just destruction to behold here, though. There is also beauty. Remember those ocean views we mentioned? They’re rather unique here at the Sunken City, perhaps unlike any others you’d experience in Los Angeles. The rugged terrain contrasts starkly with the calming ocean, and for photographers, this makes for an interesting enough dichotomy to spend plenty of memory card space on.

Another facet that interests both photographers and non-photographers alike is the colorful graffiti that is common at the Sunken City. Any place that’s officially off-limits makes for a prime location if you’re into tagging, and this is no exception. Much of what concrete remains from the buildings that were once at sunken city is covered with concrete, and even some of the rocks as well. It’s the typical mix of word art and the odd figure or two, but for those of street-styled expression (and positively bold color choices), it’s definitely worth checking out.

Unfortunately, another thing you’ll find good quantities of at Sunken City are trash. Since this site is off limits (and isn’t officially maintained by the city) waste from litterbugs has accumulated, tarnishing the charm of this ruin to a degree (but definitely adding to the apocalyptic, depleted atmosphere in the process).

And, before we move on, it might be a good idea to reiterate the danger and illegality of attempting to access the Sunken City? Just take a quick trip over to the TripAdvisor reviews of this attraction, and you’ll see post after post highlighting the fact that the police presence surrounding Sunken City is not to be trifled with, and that it’s easy to experience and unfortunate accident here. As one “Charlene H” puts it:

“This might seem like an interesting attraction, but people have died here. People regularly fall off of the cliff, and die, or are seriously injured. One person was recently impaled on a fence. It's actually illegal to go here, and the cops have cracked down on any trespassers. People have been cited, and they are CHECKING FOR WARRANTS!”

And so, you might have a more enjoyable (and safer) time checking some of the other, more legal activities that are nearby in San Pedro. You might, for instance, feel content in checking out Point Fermin Park & Lighthouse? The historic structure was built in the late 1800s and still holds that Victorian, rustic charm. The park, coincidentally, is also right on the water, so catching glimpses of the ocean won’t be hard to do from here.

Alternatively, you may go take a trip to the Korean Friendship Bell? This humongous, bronze monument was designed as a token of friendship between South Korea and the United States. The surrounding structure and park are more than photogenic enough to satisfy a thirst snapping some great pictures, and accessing the grounds is a far sight easier than getting into the Sunken City.

If you’re looking to get to the Sunken City, just to take a peek (or otherwise), you’ll find that fine apartment communities like The Madrid aren’t that far away. It’s part of the joy of living on LA’s Westside, where, in addition to easy access to hotspots all around the city, you’ll enjoy plenty to see and do right in the neighborhood. There’s a reason this community has been called an “urban oasis.” Learn more about The Madrid today, and find out exactly why this is the perfect place to call home in the City of Angels.