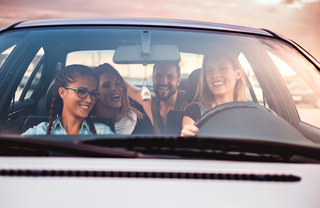 Route 66 is so famous they made a song about it, so why wouldn’t you want to hit the road and drive to your heart’s content this summer? While it no longer exists in its former, official capacity, you can still approximate the historic route all the way from the studio apartments in Los Angeles to the boundaries of the Windy City and the shores of Lake Michigan — if you’re up for the challenge. Even if you don’t plan on going quite that far, though, there are still plenty of places in between that you might want to check out, and today, we’ll be offering up a few suggestions on where to stop if you plan to “motor east,” to borrow (and remix) a line from the popular tune.

Getting Your Kicks on Route 66

Hop in the car, hit the road, and feel the wind in your hair as you start your way out of town and east along Route 66. If you feel like stopping somewhere before you leave the State of California, might we suggest Barstow and the nearby Calico Ghost Town? Once the site of a collection of old-West silver mines, this area is now part of the San Bernardino County Parks System, and a popular tourist spot for anyone who wants to take a glimpse into the rich history of California’s past. In addition to the touring the mines, you can check out the old mining railroads, try your hand a gold panning, and learn more about Calico’s origins at the Lucy Lane Museum.

As you continue heading east, you’ll hit Arizona. Flagstaff is a definite point of interest, as the town is surrounded by natural beauty. Break out the camera, and head into the Coconino National Forest if you want to check out the famous Sedona Red Rocks and lovely pines that cover the region. While you’re here, you might also want to stop in at the Grand Canyon. In person, it’s even more enormous than the photos you may have seen suggest, and soaking up those majestic views is every cross-country traveler’s dream come true. Just be careful when you’re standing near the edge!

Once you get to New Mexico, there are two cities you might be interested in seeing. The first is Albuquerque, New Mexico’s largest city and a veritable “oasis of modernity” among the barren deserts. It’s a contrast of sorts, and among many of Albuquerque’s modern features, you’ll also find ample nods to the past.

There are plenty of historic sites for you to view here, like the old San Felipe de Neri Church, along with numerous museums, and of course, the cultural centers that can educate you on the region’s Native American tribal history. Albuquerque is also the site of the International Balloon Fiesta, but unless you’re coming through in October, you won’t be able to see the colorful conflagration of hot air balloons take flight.

The second stop in New Mexico you might enjoy is Santa Fe. It’s far less populous than Albuquerque, but no less beautiful or historic. Here, you can view the stunning Pueblo-style architecture, and explore the deep tradition the town has for the creative arts. Santa Fe is also home to the New Mexico History Museum, which retells New Mexico’s story dating all the way from prehistoric times to the present.

You’ll spend a bit of time in Texas while traveling Route 66, and Amarillo should hold your interest for a little while. It’s not a large city by any means, but the Cadillac Ranch — the public art installation consisting of old, graffiti-covered Cadillac bodies makes for an interesting detour, and nature lovers should get a kick out of visiting Palo Duro Canyon State Park, which has some impressive cliffs and ravines.

In Oklahoma, you can take your pick between Tulsa and Oklahoma City (or stop in at both if you’re feeling adventurous). Oklahoma City is the capital of the State, and you can stop by the Oklahoma City National Memorial to pay respects to victims of the 1995 terrorist bombing that took place here. In Tulsa, perched along the Arkansas River, you can marvel at the unique art deco and Italianate architecture that sprung up during the town’s boom period, among seeing its many other treasures.

While you’re passing through Missouri, you might want to take a detour to the Mark Twain National Forest, but even if you don’t you’ll surely be stopping in at St. Louis. The city is famed for the Gateway Arch (a monument to the Lewis and Clark Expeditions), and the town in general is famed for its barbecue, so don’t forget to sit down for a hearty meal while you’re there.

Zip into Illinois, and you’ll eventually wind up in Chicago, the “Windy City” on the shores of Lake Michigan. This metropolis needs no introduction, and as the third-largest city in the United States, you can rest assured there’s plenty for you to do and see while you’re here. The skyscrapers, the museums, the cuisine — it’s all world-class, and you’ll have a blast before you return west to the City of Angels.

All this, and we just scratched the surface of what you can do on a Route 66 road trip. There’s plenty more for you to see along this famed path from East to West, and if you’re interested in learning more, be sure to check out the Route 66 Planner to set specific itinerary as you cruise from LA to Chicago.

When You Return to the Studio Apartments in Los Angeles...

Once you make it back home, you’ll need to take some time to recover from your lengthy road trip. Relaxing, we’ve been told, is quite a bit easier when you’re living in luxury, and few apartments in the confines of Los Angeles are more spectacular than The Madrid in that regard. It’s more akin to a resort paradise than your run-of-the-mill apartment community, and that, you’ll find, makes taking a load off a much more attainable goal. See for yourself; drop us a line to learn more about what The Madrid has in store, then learn about how you can make this your new home among the wonders of Westside LA.