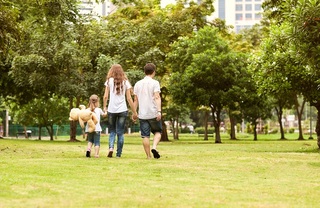 Parks can be hit-or-miss in some cities (and that’s putting it mildly), but around the apartments in LA, they seem to be just a cut above the rest. A perfect example of this is Los Angeles State Historic Park, the 34-acre wonder in Chinatown that, in addition to providing ample recreational grounds for the residents of the city, sits as a testament to LA’s dedication to environmental improvement and urban beautification:

“Los Angeles State Historic Park, which reopened on Earth Day 2017 after three years of renovations, is a 34-acre testament to power of community, a home to grassland, orange trees, public art and a mile-long run/walk trail in a spot that almost became a collection of warehouses.”

This is just the sort of city park you and your family will want to check out, so to get you acquainted with this city masterpiece, we’re going to provide a quick rundown on the site’s history, it’s incredible transformation, and what you’ll find there today.

In pre-colonial days, the space that is now Los Angeles State Historic Park (LASHP) belonged to Tongva Native Americans. In the early days of settlers, when this was still the “Pueblo de Los Angeles,” it was the site of the Zanja Madre Aqueduct, and in the late 1800s, it became a rail yard. The “park” would stay that way for more than a hundred years, when the Union Pacific Rail Company was about to cede control of the land to a developer that sought to turn the area into a warehouse space.

Understandably, this ruffled the feathers of locals, who weren’t happy about a big industrial yard going up in their neighborhood when they didn’t even have ample park space, so they formed what was known as the Chinatown Yards Alliance, and campaigned to have the development project stopped. With an assist from then-governor Gray Davis, they got their wish, and perhaps even a bit more:

“Calling it a “once in a lifetime opportunity,” Governor Gray Davis signed California Senate Bill 1177 on Sept. 28 2001, authorizing the California Department of Parks and Recreation to “acquire, assess, clean up, plan, design, build and maintain the 34-acre parcel. The purchase of the site marked one of the most significant environmental justice victories in Los Angeles and a testament to the power of grassroots activism.”

This was a big victory for the people of Los Angeles, but in spite of the fact that a temporary, 13-acre area of the park was constructed by 2006 to grant residents immediate access to at least some of the recreational area, the completed project would not come for a whole 16 years. It wasn’t until April 2017 that LASHP unveiled its “grand reopening,” but as most tell it, the results were worth the wait.

Why the delay? Getting funding together for all the renovations was a time consuming process, but the cooperative efforts, the $150 million needed to transform the space was invested into the project, and now, LASHP sits as a cutting-edge example of how drastically an urban are can be transformed when the appropriate will and resources are applied.

Now, when you step foot into LASHP, the first thing you’ll notice is how beautiful the park is and the amazing views it provides:

“For the best views—and to get the only true sense of how big this space is—climb the pedestrian walkway, which is situated over the former rail depot’s roundhouse, located in the center of the park, to gaze at grassy knolls dotted with bright-orange poppies.”

Beyond the views of the landscape, the park is a fine place for taking part in the activities you’d typically associate with such a space — running, biking, picnicking, birdwatching, flying a kite — but perhaps even more impressive are the grand artworks that lay scattered about:

And then there’s the park’s performance grounds. There are concerts, performances and more held here on a regular basis, so be sure to check the calendar so you can plan a visit around a show you really want to see.

The Apartments in LA Hold Even More Wonders to Enjoy

If you thought LASHP sounded like a great place, wait until you catch a glimpse of amazing city communities like The Madrid. Located just moments from LAX, these apartments offer unparalleled access to all the greatness that is the Westside of LA — from Santa Monica to Culver City and beyond — and with a proximity to the city’s major thoroughfares, you’ll find that getting out and exploring is a task that’s well within your grasp. Come check out the wonders The Madrid holds, then make this your new LA home.