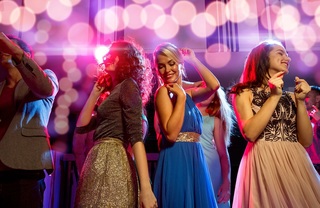 The best part about living in The Madrid apartments in Los Angeles is New Year’s Eve always provides so many astounding things to do that it’s hard to keep track of everything. Spending time on New Year’s Eve in LA is an experience you’ll hardly ever forget. It’s right up there with NYE in Times Square in New York City and other major events.

Now you have a number of different options to take advantage of on this awesome holiday as you ring in the new year. You can go to special New Year’s Eve parties and events, hang out at your favorite watering hole, or spend the evening in a nightclub with other revelers who plan to enjoy the rest of 2017 just as much as you do.

If you’re looking to save money on this somewhat expensive holiday, there are even some fun free things to do in LA on this exhilarating night. So don’t feel like you have to spend a small fortune to attend an expensive party or event. We’ll share one or two free options with you below as well.

With that said, let’s take a look at some of the most exciting events taking place on December 31, 2017 in a Los Angeles, California this year.

If you’re looking for something fun, low cost or even completely free to do this year on New Year’s Eve, you should head over to Grand Park in LA. You can definitely take advantage of all the free things going on in the area, or you may want to spend some money to buy some food, drinks, or other forms of entertainment.

The cool thing about this New Year’s Eve destination is Grand Park is right next to City Hall and the Music Center, which means the three block radius in the area is going to have so many amazing things going on that it’s not even funny. As one piece put it, the area is literally going to be covered in culture.

As a matter of fact, City Hall itself is going to look absolutely amazing this year, since they’re turning it into a 22 story 3-D projection, so the entire building is going to be a piece of artwork. Plus, there’s going to be a midnight countdown to bring in the new year, so there’s definitely a lot happening at this LA hotspot.

The best thing about this event is the weather’s going to be beautiful, they’ll be elaborate floral floats, many fantastic musical performances, and even marching troupes. Best of all, the Rose Queen and her court are going to be in full attendance, so this exciting Pasadena event is one you’ll hardly want to miss. Be prepared for a large crowd though, because the celebration typically draws over 1 million people to Pasadena every year and this year should be no different.

For many of us, the idea of going to formal galas or paying steep VIP fees makes us want to spend NYE at home. But you don’t have to miss out on such an amazing night because Bootie is a much better option.

The cool thing about going to this party in LA is that they don’t expect you to dress up and wear incredibly expensive, elaborate outfits. They also do not charge a gigantic cover price to get into the venue, so it’s definitely going to be an event for the ages and a place to go to have fun without spending a small fortune.

The unpretentious LA crowd is all about singing, dancing, letting their hair down, and having a wonderful time as they put 2017 to rest forever and welcome to 2018 with open arms. This party may get a little bit messy, and it may get a little bit outrageous at times, but it’s always exciting, you never know what’s going to happen, and most people say that it’s a night they’ll never forget. So if you’re into that sort of thing, we highly recommend checking it out on December 31, 2017.

Don’t worry! No one is expecting you to stay sober on New Year’s Eve this year. On the contrary, this party will take you back to the 1920s during the Prohibition era, when it was illegal to drink alcohol, yet there was more alcohol flowing in speakeasies and other underground bars and people always manage to have an amazing time.

This party is going to take place in Union Station, downtown LA’s Art Deco marvel from the 1930s. There’s going to be all kinds of amazing things going on, and as mentioned, there’s going to be a lot of alcohol at this event as well, so you must be 21 years old or older to attend. You may also wear roaring 20s attire, but it isn’t mandatory in order to get into the party, although you must wear formal attire to attain entrance.

At the event, you’ll be wowed by jazz musicians, DJ sets, custom cocktails, burlesque dancers, and plenty of champagne. You’ll see men and women dressed up in 1920s attire, so they’ll be wearing top hats, tuxedos, feathered headbands, flapper dresses, and so much more. You’re going to love every minute of this marvelous party if you’re into the roaring 20s and would love to take us trip back in time this New Year’s Eve.

As you can see, there are so many awesome things going on this New Year’s Eve in Los Angeles. Try any of the suggestions we’ve mentioned today, or take a look at this to find other fantastic suggestions.