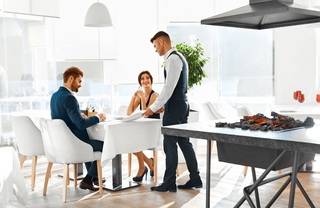 Love is in the air. Places like The Madrid apartments in LA are feeling it, and to express that love, there’s one surefire technique that works nearly every time. We’re talking, of course, about a romantic dinner, something for which there’s no shortage of places in Los Angeles. Across the city, there’s a long list of eateries that people enjoy, but only a few that can claim the top of the charts when it comes to romantic appeal. If you want to celebrate with your special someone, make sure you do it right and check out one of the following establishments, as they count among the most fabulous in LA when it comes to creating the perfect atmosphere for a couple’s night out.

You’ve heard of chef José Andrés before, right? Even if you didn’t know him by his culinary accomplishments, the man has been in the news recently. Beef with Ivanka Trump aside, though, the Spanish-American restauranteur is well-known across the country for bringing the “small plates” dining concept the the United States, and for his number of fine-dining establishments nationwide.

The Bazaar at the SLS Hotel is one of these many establishments, where he combines “traditional Spanish flavors with cutting edge culinary techniques in playful and sophisticated dishes while Starck uses design elements like elegant chandeliers and retro wallpaper to craft dramatic and inviting interiors.”

Andrés’ infusion of those old-world Spanish elements are what add to the romance of this establishment, while fine dishes like the classic white sturgeon, fermin platter, and mushroom ramen ensuring you’ll leave well-fed.

As an extra treat for lovers, they’ll be running a special 15-course menu straight from the mind of the master, including truffle supplements, wine pairings, a glass of cava, and a “decadent dessert course” to round it all out.

“Where the stars go to play” isn’t the official tagline, but it could be, as it’s a well-known celebrity hotspot. You’ll recall how the Daily Beast chronicled Catch LA’s ascent to becoming LA’s Coolest Celebrity Restaurant, and how it was dubbed the Coolest Damn Rooftop In West Hollywood by Eater, but does cool also equal romantic?

In this case, yes. If for nothing else than it’s scenic location, Catch is an insanely attractive spot to eat. It rests on high above the hustle and bustle of the West Hollywood streets, providing guests with a view of this part of the city that rivals any of the best. Inside, the heavy use of brown tones in the color scheme -- from the brick to the wood to the upholstery on the seats -- creates an intimate and natural feeling space that is perfect for a couple’s evening.

Then there’s the open kitchen and open-air dining room, the perfect setup for a warm, moonlit night spent with a special someone. Combined with the amazing food you’ll find at Catch -- great sushi, desserts, vegan options, and the like -- you’re in for a real treat every time you visit.

It’s a restaurant done up almost like a scene in a modern-day fantasy novel, of course it’s romantic. This Studio City option gets such compliments as “having the perfect date night atmosphere,” courtesy of the “enchanting fire-lit patio” and the “elegant bar area.” These claims aren’t far from the truth, if at all -- Firefly is one of the most beautiful establishments you’ll find in the area. Then there’s the food. It is, according to Thrillist, a nice mix of American favorites:

“This laid-back, Studio City bar is most famous for stirring up its very own infused alcohols (think jalapeño-pineapple tequila, apple-vanilla-cinnamon bourbon), which the bartenders happily use to concoct custom cocktails. Dinner eats include gussied up American classics, like free-range chicken with bacon and honey dates.”

Those who frequent Firefly say they dig the low-light setting, which adds to the romantic vibe. Favorite dishes amongst the masses include the lamb duo, filet mignon, and skirt steak. Did we mention the dishes are also the brainchild of former Cutthroat Kitchen winner Perry Pollaci? It’s an amazing setup, one that is sure to impress a date by setting a cozy mood.

Much in the same vein as Catch, Perch is able to stun visitors with the “look from on high” that it provides of its surroundings. In fact, as Zagat notes, this restaurant might be “more about the looking than it is about the cooking,” as they put an emphasis on setting the mood over showing off with their food:

“This enchanting rooftop bistro’s perch high above the city affords lofty views of downtown and sets a bohemian-chic stage for young, loud post-work crowds to down fantastic cocktails while listening to live jazz on a spectacular wraparound patio; though the service is adequate and the moderately priced quasi-French fare is perfectly fine, most admit it’s more scene than cuisine.”

It’s definitely the kind of place you’ll need to break out your good wardrobe for, and, if you do try the food on for size, you’ll be treated to some of those French-influenced favorites like “rabbit rillette with braised plums, candied kumquat & vanilla shallot marmalade; pork confit cassoulet with pork belly & cracklings; and the three-mini-club platter called Duck, Duck, Goose.”

Beyond the food and the views, you’ll feel the romance as you setup in the dining area at Perch -- a smattering of French decor, an elegant bar space, lovely paintings -- it all comes together to create that air of romance.

If you’re looking for the most elegant and classy of French offerings mixed with a taste of sunny California, Cafe Pinot, “The prettiest patio in all of downtown,” is the place to go. There’s a reason this spot has been called one of LA’s most romantic restaurants, and one of the best for weddings as well -- because the entire atmosphere is geared toward setting the mood.

The patio space is where it’s most amazing. It’s been described as charming, nestled away near the shady gardens of the Central Library while dazzling the crowds who roll in and out of this establishment. You and your date will probably enjoy this restaurant, though, even if you don’t snag any outdoor seating.

The Madrid Apartments In LA Get You Close To The Romance

If checking out the romantic restaurants is on your list of things to do, you’ll want to make sure you choose fine communities like The Madrid to call home while you do it. This complex brings it all together -- spacious floorplans, amazing features, even a location that’s near everything you’ll need. Check it out, and make it your choice for superior Los Angeles living.