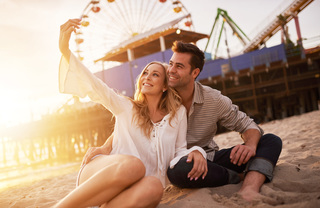 More than anything else, Southern California is known for its great weather and spectacular views, so it makes sense that there’d be a whole host of highly “instagrammable” locations all around the apartments for rent in Los Angeles. What do we mean, exactly? In a sense, you could think of “instagrammable” as being akin to photogenic, or picturesque, but as the name suggests, there’s a deeper element that’s closely tied to social media as well.

Instagram, and social media in general, has raised the bar on what society deems beautiful. As a consequence, truly instagrammable spots don’t just look pretty, they evoke a sense of perfection, even if its only on a subconscious level. “I wish I were there!” is a common reaction to the “instagrammable” shot, and, as we mentioned above, LA is chock full of such locations.

Where might these be, exactly? That’s the topic we’ll be delving into today. We’ve taken a look at some of the popular spots around the city that have that certain something that makes them Instagram-worthy. Read on, and you’ll get a better sense of what we mean. Once you’re through, be sure to plan a quick trip to a few of these locations to snap a few shots of your own!

Perched at the edge of the Pacific Ocean and ornamented by the quaint-but-cute Pacific Park, Santa Monica Pier is a busy hotspot with loads of photogenic value. This place has been featured in many a movie and TV program (for obvious reasons, and there’s a certain charm that comes from being a century-old landmark in a city steeped in rich history.

If old landmarks are your thing on Instagram, Grand Central Market, constructed in 1917, should be another notable spot near the top of your list. This emporium might not look like much from the outside, but step inside and you’re treated to a world of visual wonder, from the vendors and beyond. To top all that off, it’ll be a prime opportunity to get a bit of shopping done while you’re out there “doing it for the ‘Gram.”

Situated on the eastern edge of the Santa Monica Mountains, Griffith Park is one of the largest urban parks in the country, giving it plenty of variety when it comes to the areas you can explore and types of shots you can plan. Wherever you decide to go during your jaunt here, though, you owe it to yourself to trek up to Griffith Observatory at least once, and get a view of the city from on high.

This architectural wonder, built in 1893, is a treat to look at from both inside and out. If the captivating Romanesque/Renaissance Revival exterior wasn’t enough, the interiors of the Bradbury Building offer even more, with the skylit atrium being of particular interest to many a visitor. While you can’t travel past the first landing inside, there’s still plenty to work with while creating that perfect Insta-shot.

Scenic and dog-friendly, Lake Hollywood Park has everything you need in the way of atmosphere to compose some truly awe-inspiring photos. There’s plenty of open space for you to play around with here, and with the hills in the background, you should have no problem helping catch the eye with your compositions. Don’t forget to say “hi” to the Hollywood sign while you’re here.

If you want something more of an elevated view for your outdoor Instagram shots, you might want to try Runyon Canyon Park on for size. The view to Downtown Los Angeles from Inspiration Point is, well, inspiring, and the many trails on the park can make for some great locations to take some shots of yourself or a friend, if you’ve got the photography skills to find the right angles to maximize their appeal.

The exterior of the Walt Disney Concert Hall on South Grand Avenue is one that’s just begging to be photographed, and clever use of the surrounding Downtown Area will likely result in some shots that are the envy of all your social media pals. If you need some inspiration on what sorts of angles to hit, you can easily find photos of this structure online, and use them as a guideline for how you should approach giving the concert hall your proverbial “best shot.”

People speak of the beauty of Venice Beach both far and wide. From the lovely Boardwalk to Abbot Kinney Boulevard, and even busy Muscle Beach, you’ve got your pick of specific locations to choose from when deciding where to stage your Instagram shots here, and it’s hard to go wrong with any of them. Hit the beach around sunset, and you’re sure to catch the warmth of dusk to enhance your photos here.

Head down to San Pedro to see the Korean Friendship Bell, a massive bronze monument, and token of the special relationship between the United States and South Korea. The bell itself is a sight to behold, and the temple that houses it is just as magnificent and photogenic. The picturesque surroundings add to the equation, creating a spot that’ll look amazing regardless of how you choose to photograph it.

This contemporary art museum on Grand Avenue is a testament to the mind-bending power of modern art, and a marvel of stellar architecture. Snap a few photos of the exterior, and be sure capture the surrounding street scenery for a composition that brings it all together and holds a special place on your Instagram feed.

When it comes to proximity to the best of LA, few spots can challenge The Madrid. This stunning Westside community puts you in prime position to explore the city, and does so while offering up some of the most gorgeous residences and luxurious conveniences you’ll find in an apartment. Ready to experience LA the way it was meant to be? Take a look at what lies in store at The Madrid, and take the next step to calling this extravagant community home.