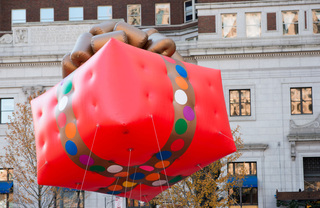 Christmas comes but once a year, and with it, residents in the Los Angeles rentals have a good reason to get excited. You see, with the approach of Christmas also means the approach of the legendary Hollywood Christmas Parade, the annual spectacle that has been a feature of the City of Angels since the early half of the 20th Century:

“Each year, Tinseltown kicks off the start of the holiday shopping season with a major, star-studded, 3.2 mile Christmas parade along Hollywood and Sunset Boulevards. This annual holiday event began over 85 years ago (in 1928), and was originally called The Santa Claus Lane Parade. In fact, it inspired singer Gene Autry to co-write the song Here Comes Santa Claus.”

It’ll be just as magical and star-studded this year, and if you’re in the mood for checking out the action down in Hollywood, we’ve got some details you’ll want to arm yourself with before you make the journey. Read on, as we cover what’s going down at this year’s Hollywood Christmas Parade.

What the Hollywood Christmas Parade Is All About

This is a family tradition for many Angelenos, and part of what makes the parade so stunning is the amazing line-up of live performances that come through every year. This year is no different, and will feature a more than a few acts you know and love:

Ceelo Green — Five-time Grammy Award recipient Ceelo Green is a face familiar to all, from his storied career as a singer and songwriter (with Goodie Mob and Gnarls Barkley) to his role as coach on popular TV program The Voice.

Ruben Studdard — Perhaps the well-known victor of American Idol, Ruben Studdard, has been a star of stage, film, and the road since his win thirteen years ago. He’ll be lending his vocal talents to the parade this year.

The Village People — Everyone loves music to dance to, and that’s something The Village People have been supplying for near-on forty years. It’s hard not to smile and tap your feet to the beat when these music legends start performing.

The Tearaways — These pop/rock notables know how to blend the tones of British Invasion and Surf Music like no others, and have a long history of doing so. If you love counterculture, you’ll love the way they play.

Tommy Wind, Titou, and Farrell Dillon — These magicians of Masters of Illusion fame will be stunning audiences with their astounding tricks and superb sleight of hand. This performance will be a magic lover’s dream.

Nick Fradiani — Season 14 winner of American Idol Nick Fradiani is quite the talent with both his voice and guitar. His musical journey is an inspiring one, and he’ll be bringing his very best for the Hollywood Christmas Parade.

Breanna Yde — It’s rare for someone so young to be talented in just one area, but Breanna Yde has conquered three: acting, singing, and music. The youthful, triple-threat shouldn’t be taken lightly, and will be gracing the stage at the Hollywood Christmas Parade to deliver a knockout performance.

Band of MerryMakers — When it comes to delivering holiday cheer in musical form, few can do it like the Band of MerryMakers. Their rotating roster has featured the likes of Christina Perri, Mark McGrath, Natasha Bedingfield, Bebe Rexha, Jason Wade, and many others.

Tom Dixon — Straight from Nashville is explosive songwriter Tom Dixon. He’s got a unique twang all his own, and his touching tributes to wounded combat veterans have brought tears to many an eye.
The Rollettes — This dance team, founded in 2012, is all about supporting and empowering women with disabilities, and has a revamped lineup and celebrity choreographer G Madison working with them for a truly thrilling performance.

In addition to all these talented performers, the parade will also feature a loud and live procession of marching bands from around the area, including:

And of course, the parade wouldn’t be as special if it didn’t have its Grand Marshal to help run things. This year, that role will be filled by none other than Nancy O’Dell:

“Emmy Award-winning journalist Nancy O’Dell has proven to be a force in all areas of her career as a host, author, producer, and entrepreneur. One of the country’s most respected and leading entertainment journalists, O’Dell is co-host of the most-watched entertainment news program in the world, three-time Emmy Award-winning ENTERTAINMENT TONIGHT.”

It’s going to be a night to remember, so be sure to get your tickets in advance of the November 25th parade date if you plan on showing up in person. Things kick off at 5:00PM with the concert, and the parade gets under way just after 6PM. You’ll want to note the location (right in the heart of Hollywood) and check out the parade map to get an idea of where all the action is going to be centered. Be mindful of those road closures and where to park, and have a great time at the Hollywood Christmas Parade.

It’ll Be a Magical Christmas Around the Los Angeles Rentals

Just as it should be, fine communities like The Madrid will be abuzz with excitement over all the Winter wonder. Apartments like these are a great place for a bit of holiday magic, with perfectly-tailored living spaces, a convenient spot within the city, and welcoming residents who make the entire experience just that much more enriching. Picture yourself among this lovely, urban oasis? Be sure to drop us a line to check availability, and put yourself one step closer to calling The Madrid home.