Get out and Show Your LA Pride 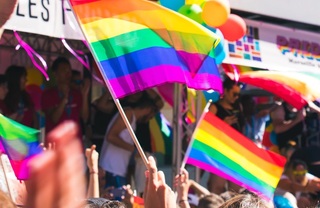 It’s no secret that LA has played a groundbreaking role in LGBT history. Residents of all Los Angeles’ rentals know how areas like West Hollywood became the epicenter for many LGBT movements. It’s a detail that can’t be overlooked, and, in fact, it’s one that is prominently celebrated at one of the most significant pride events across the entire nation:

“One of the biggest pride events in the US, LA Pride attracts as many as a half of a million people during its two-day festival at West Hollywood Park, including its signature Sunday parade.”

It’s going to be big, it’s going to be loud, and it will undoubtedly be fun. Chances are, you’ll want to enjoy some of the festivities too, so if you fancy yourself interested in heading over to West Hollywood for a raucous and wholesome good time, keep reading. We’re bringing you all the info you’ll need to make the most of it.

A Look into LA Pride

We can’t talk about the festival without talking about one of its most notable architects, Christopher Street West. Thankfully, they’re more than happy to share a bit about their important background through their website:

“Christopher Street West (CSW), organized the world’s first permitted parade advocating for gay rights on June 28, 1970 as a response to the Stonewall Rebellion on Christopher Street in New York City the year prior. Since then, we have built a rich history as an active voice for the LGBTQ+ community across the Greater Los Angeles metropolitan area.”

That’s right. The parade has been going on for more than 40 years, and every June, you can count on it making a huge splash in West Hollywood. Among the many purposes of LA Pride is to create safe spaces for the expression of LGBT identities, and to carry on the much-needed activism required in the fight for equality. They celebrate Los Angeles’ diverse culture, and base their mission on five key values:

A component of that overarching goal of equality is the LA Pride Festival. This year it will take place from June 9th to June 10th at West Hollywood Park and will features some riveting events to help make the time spent there even more memorable.

Headlining the event will be “R&B sensation” Kehlani and “international pop star” Tove Lo. The duo are certain to put on quite the pair of performances, but they won’t be the only artists in attendance, not by a long shot. The lineup also includes:

You can already get advanced tickets for the show, with Single Day tickets costing $25, Full Weekend tickets running $35, and Seniors/Disabled/Vets/Military tickets priced at $15. There are also Backstage tickets available, priced at $250 for a single day, and $400 for the full weekend.

Proceeds from ticket sales will help support the Pride Parade (more on that later) and will also go to city programs such as CSW philanthropy and Casa del Sol. If you’d like, you can try to score some free tickets by volunteering for a 4-hour shift. LA Pride is able to stay active because the community stays involved, so lending some support will be greatly appreciated.

As the event organizer remind us, “Pride is also a time when we can let our hair down among like-minded souls, celebrating and embracing the unmatched diversity of our strong, supportive, caring, and quite colorful community.” Pride Week will be a time for exactly that, and there are a number of additional events that will be complementing the stunning displays of music.

The most prominent, perhaps, is the culmination of Pride Week, the LA Pride Parade. This show of solidarity will take place on June 10th from 11:00AM to 2:00PM, on Santa Monica Boulevard. Since that very first parade back in the 1970s, this has been an even to present hard-hitting political viewpoints, but in a manner that is both fun and celebratory.

Far from a stodgy display, this year’s Pride Parade, like many before it, will likely take on a party-like atmosphere, boosted by the joyful spirit of LA’s LGBT community and their straight allies, while still lending gravitas to the current social and cultural climate within the country.

Other events happening during pride week that you’ll definitely want to check out include:

LGBT Night at Universal Studios — Wherein the LGBTQ+ community, their incredible straight allies, family, friends, and colleagues to take over the theme park for one amazing night.

Women’s Night at the LA Sparks — A time for basketball fans to join together at the Sparks Pride Night and Post-Game All-Women’s Party, coupled with a fundraiser for Christopher Street West (proceeds will benefit community-wide programs).

LGBT Night at the LA Dodgers — The LA Dodgers will be honoring some of the biggest LGBT names in sports, and Dodgers fans will be packing the stadium for a thrilling night of baseball action.

A roundabout way, to be sure, but still. The fine communities of Los Angeles are where the cherished citizens of the city lay their heads, and increasingly, these communities are taking the standards to a whole new level. Consider The Madrid, one of the most well-kept and luxurious spots you’ll find near LAX.

The openness, friendliness, and sense of belonging runs deep here, and making newcomers feel welcome is what the community prides itself on. Check out what life might be like here, and be sure to take a look at all the wonderful perks you’ll enjoy in the city of Angels.