Events at The Broad this Fall 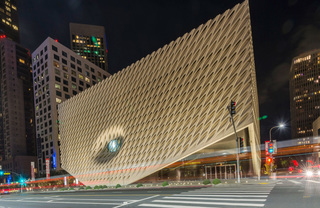 The Broad hosts some of DTLA’s finest and most unique exhibitions. From any of the LA apartments for rent, it’s just a short trip away to view any of their exhibits or collections. Here’s what you can expect in the following weeks.

Shot in 16 mm film with color and sound, this 139-minute piece from Sharon Lockhart incorporates intimate photographs of the youth who live in the rural town of Pine Flat, California. The film is comprised of twelve ten-minute takes, allowing viewers to understand how subjective perceptions of time can be. The work is a unique piece that submerges itself into the surround day to day life and culture of its subjects. Lockhart’s work was recently featured in A Journey That Wasn’t as well as the film Pine Flat, 2005.

This exhibit takes place at the REDCAT, which is located at 631 West 2nd Street in DTLA inside the Walt Disney Concert Hall complex. The box office is open from Tuesday to Saturday between the hours of 12 and 6 pm, but you can also buy tickets two hours before any performance.

The Broad, the American Cinematheque, and Ava DuVernay’s ARRAY are presenting a special screening of Bill Gunn’s 1973 independent film Ganja & Hess for Halloween this year. The film has been restored thanks to the help of The Film Foundation and The Museum of Modern Art, revitalizing this revolutionary gothic horror.

The film plays on controversial themes of the era to deliver an original and systematic take on religion, sex, and African American identity in the 70’s. Duane Jones, lead role in Night of the Living Dead, stars as an anthropologist who receives the gift of immortality after his assistant stabs him with an ancient ceremonial dagger. Following classic motifs, this gift comes with a curse. In Hess Green’s (Duane Jones) case, that curse is an insatiable thirst for blood.

Instead of a classic monster-esque horror, Gunn’s film has its characters inquisitive about the curse, striving to learn what power Hess’ thirst for blood holds. It’s as though provoking as it is unsettling. A discussion will follow the film so fans and first timers alike can talk about the various themes found throughout the movie. Don’t forget to wear a costume!

Broad artist Neo Rauch, founder of The Industry Yuval Sharon, and painter Rosa Loy come together to talk about their recent production of Richard Wagner’s Lohengrin, which was features at the 2018 Bayreuth Festival. The collaborative process employed by all three artists helped shape this production in vital areas from its striking sets to the elaborate costumes.

Fans of Lohengrin will gain unique insights into the context behind Rauch’s work as well as the contributions made by these three artists. Features as part of The Broad’s A Journey That Wasn’t exhibition, this unique take on the 1850 opera is exhilarating.

The Un-Private Collection itself as an ongoing series at The Broad, showcasing the museum’s thousands of contemporary works in its collection. If you can’t make it to the event, all Un-Private discussions are live-streamed and later made available through the museum’s website.

En Cuatro Patas features numerous editions, but this exhibit at The Broad focuses on the works of Nao Bustamante and Gina Osterloh. The exhibition takes place in the lobby as well as the Oculus Hall, aligning itself with Patas’ exploration of a politicized body. As a feminist movement, its artists explore fantasy-based alternatives to the embodiment of women. Animal, shadow, and other non-human elements combine with the body in performance as well as film and video.

This will be the first time several of En Cuarto Patas’ performers set foot in Los Angeles, with the bulk of their shows held in numerous areas across Latin America. It’s a surreal and at times strange experience, but altogether one that encourages viewers to take a closer look at the themes surrounding humanity from our psychological perception of ourselves to the things that live within our subconscious minds.

Osterloh’s work, Shadow Woman, blends the body with shadow to create an almost split person, intertwining with itself as the lines in-between what is tangible and intangible blur. It explores the fundamentals of early photography forms, but reveals the desire humans have to fix themselves and others around them.

Bustamante’s work, Given Over to Want, explores both natural and contrived desire. With a little shadow play, tape, and boxed wine, she becomes an image that invokes a primordial understanding of hunger, thirst, and want. The Broad describes it as, “both fully human and fully alien.”

Just a short distance away from these fantastic events at The Broad rests The Madrid. This perfectly manicured community offers its residents the finest in life’s luxuries paired with strong sense of community. The park-like setting contrasts with the surrounding urban area of Los Angeles, creating an oasis, an escape.

Your premier location places you minutes away from the beach, Loyola Marymount, and the finest in dining and entertainment. However, you might find it hard to leave home with the vibrant community just outside your front door. Catered barbeques, resident appreciation days, and community spaces designed for interaction create a tight-knit sense of community and neighborly bonds.

Residents have access to a plethora of carefully curated amenities, expanding the space outside of these fully furnished townhomes. Your home isn’t simply the spacious floor plan you live in, it’s the entirety of The Madrid.

Designed for convenience and comfort, these homes feature the finest in modern décor and appliances to help you feel at home each and every time you set foot through thew door. Relaxing atmospheres are created in the surrounding landscaping, creating a hub between work and play.

We invite you to experience an elevated sense of living, one that redefines life in Los Angeles. Welcome to The Madrid.