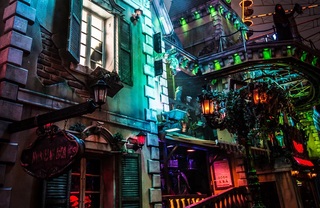 Halloween isn’t quite the same without a good scare or two. Thankfully, if you’re around the LAX apartments, there are plenty of options out there if you’re looking to get some frights in during the month of October. From Downtown to Long Beach all the way back up to Griffith Park, there’s an abundance of simulated terror around the city, and all you have to do is get to the right spots on the right evenings to enjoy.

Which is where we come into the picture. With all the options around for Halloween fun, it might be hard keeping track of them all on your own. That’s why we’ve put together a handy guide for you to follow. We’ve got the lowdown on all the best in Halloween excitement, along with the where and when so you can plan your visit.

Those who grew up in LA have probably heard the name “Knott’s Berry Farm” uttered before, and likely have a cursory understanding (at the least) of what Knott’s Scary Farm, the self-described “most haunting Halloween experience in Southern California” is all about. From September 20th to October 31st (on select evenings), this romp through the park features haunted mazes, spooky live shows, a thousand terrifying monsters prowling the premises, and an overall nightmare scenario that’s guaranteed to leave an impression. Remember, this one’s not suitable for kids under 13.

If the same-old haunted houses aren’t quite doing it for you, maybe you’d prefer an haunted boat instead? Dark Harbor brings you exactly that, a terrifying adventure aboard the Queen Mary filled with tight corridors, skinny stairwells, and plenty of maritime fright to fill your night. In addition to the standard spooky ghost-boat experience, you can check out the RIP Lounge where the scares are fewer, but the alcohol flows mour plentifully. For best results here, you might want to bring an extra $20 with you to get in on the Happy Hour from 6:00PM to 8:00PM

If you’re looking to make the trip into Downtown LA for some Halloween excitement, then Creep LA will provide you with the terror you seek. A product of Just Fix It Productions, the “innovative immersive storytelling” troupe formed by Justin Fix, this show takes on the oft-explored topic of nightmares, and brings one to life through their unique take on avant-garde theatre. Throughout the 75-minute show, you’ll travers surreal rooms designed to shock you, and may even get spirited away for some impromptu, one-on-one scare time.

Technically, this one isn’t a house, but it’s a great Halloween experience all the same. The Halloween Ghost Train in Griffith Park, part of the Travel Town museum railroad, is a marginally scary affair that will offer equal measures of smiles and scares for you and the family. It’s been a while since this one’s been in service (a few years, actually) so you’ll be able to see what a bit of time off has down for the Ghost Train’s overall quality. With any luck, this will be even better than the last iteration.

Halloween in Hollywood — could you ask for anything more? With a name like Urban Death, presented by Zombie Joe’s Underground Theatre Group, you can be almost assured that something frightful will be taking place at this occasion. For this instance, the frights will come in the form of quick, experimental shows that chill to the bone. The so-called “tour of terror” has been termed “shocking,” “mind-blowing,” “intense,” and a host of other adjectives meant to convey fright and terror, so you’ll probably have a blast when you head down to Lankershim Boulevard to enjoy this one.

Maybe you can’t get enough of Griffith Park during Halloween? If that’s the case, you can head back up there for the Los Angeles Haunted Hayride, and be sure to take the kids along since this is a family-friendly affair. Sure, there are a few pseudo-scare happenings during the hayride, and there are complementary events like the “scary go round,” and “scare zones,” complete with the usual Halloween monsters, but you shouldn’t expect anything to knock your socks off. It’s still a great time, though, and this year will be the attraction’s 10th in existence, so the park will be ramping up the excitement for this very special anniversary.

Universal Studio’s take on Halloween, the Halloween Horror Nights, has a reputation for pulling out all the stops in service of a good scare. You’ll be able to enjoy this one from September 14th all the way through November 3rd, and you’ll get to experience plenty of themed-thrills that will send a chill down your spine. Don’t forget to catch the Terror Tram and Universal Monsters Maze while you’re over there for the ultimate in suspense.

Have you ever tried a multi-layered, multi-sensory scare experience before? That’s what you’ll get with Into the Black, a combination of short film and in-the-flesh terror that follows an undoubtedly spooky scenario:

“You'll follow in the footsteps of the paranormal investigative team as you enter the front doors of the Victorian house and venture into its dark hallways that are home to denizens of the dark.”

Are you ready to tackle the terror’s of the night? Do you “have what it takes to survive the house of the Devil?” You’ll find out when you check out one of the scariest haunted houses Southern California has ever seen.

Getting to the Action From the LA Apartments is Easy

You might not realize it at first, but beautiful communities like The Madrid make commuting around the area just a bit easier, since they’re conveniently located near 405, 105, and 10 Freeways, along with a bunch of other attractions you’ll definitely want to see while you’re living in LA.

You’ll be able to get to whichever haunted house you’re looking to attend in no time, and when Halloween is over, you’ll continue to enjoy the ease of travel and the lovely surroundings. Be sure to check out everything the Madrid has to offer and make it your choice for living in one of West LA’s most desirable destinations today.