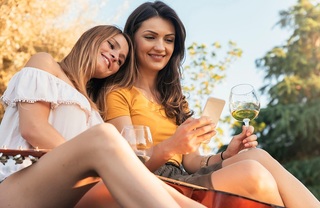 If there’s one thing residents of the Madrid apartments in LA love, it’s having a great time at a special event.

Few things can match the allure of heading to an upscale location, mingling with like-minded guests, and sampling the tasty man-made treasure known as wine. From May to August, the Barnsdall Art Park is providing a fine backdrop for such festivities at their Friday Night Wine Tastings:

“With stunning views overlooking the City, Barnsdall Art Park welcomes Angelenos—21 years and older — to sip wine, picnic and watch the sunset for another not-to-be-missed season of wine tasting at this iconic cultural destination.”

They’ll be teaming up with Silverlake Wine to procure some of the finest selection Los Angeles residents have ever had the pleasure of tasting, and pairing the event with an all-star lineup of “rotating food trucks” and DJ music. It’s not to be missed, and we’ve got all the details you’ll need to have a great time assembled right here.

Surprising, but certainly possible if you don’t frequent East Hollywood very often. Located about 14 miles north of the Madrid apartments, Barnsdall Art Park is a city park donated to Los Angeles by Aline Barnsdall, an American oil heiress of the late 19th and early 20th Century.

As a part of that mission, they throw regular events here: workshops, recreational activities, and, of course, the Friday Wine Tastings which will be taking place at 5:30PM through August.

You can check out more about their other events by taking a look at their monthly calendar, but for now, let’s dive into the Wine Tastings and see what’s in store.

What The Wine Tastings Are All About

We’ll start by covering the general details. Wine tastings will run from May 25th to August 31st, and take place from 5:30PM to 8:30PM every Friday. Standard tickets for the event are $35 per person, and tickets that include a tour of the Hollyhock House (more on that later) will run $50 per person. The address and location, if you’re wondering:

Parking will likely be limited, so it’s advised you take a ridesharing service to the event to minimize congestion. If you have to drive, however, they recommend parking at the off-site lot at the Kaiser Permanente building, located at 1549 Edgemont.

Though it might be a no-brainer, you should note that no outside alcohol is permitted on the premises. If you’d like to bring food, however, that’s fair game. As the event page states, you can have yourself a veritable picnic, and lounge on the lawn as the fanfare unfolds around you.

Speaking of the fanfare, it comes highly rated by those who have graced the art park’s grounds in the past:

“Love, love, love the wine tasting summer Friday's at Barnsdall. One of the best affordable events of the summer. Bring a potluck to share as the wine flows. Always try to catch at least two every summer.”

You’ll find similar praise of the event, courtesy of outlets like NBC and The Eastsider LA, so you can be sure that a trip here will be well worth the effort.

What About Those Tours?

As mentioned above, purchasing a special ticket will also net you a tour of the Hollyhock House. Tours take place at 5:45PM, 6:15PM, 6:45PM, and 7:15PM. It will be well worth your time, as the building, a masterpiece of famed architect Frank Lloyd Wright, has been recently renovated and restored to its true glory:

“Hollyhock House is Frank Lloyd Wright’s first Los Angeles project. Built between 1919 and 1921, it represents his earliest efforts to develop a regionally appropriate style of architecture for Southern California.”

Hollyhock House was named after Aline Barnsdall’s favorite flower, and on the tour, you’ll get to see why the namesake of such a beautiful plant was chosen for this structure. There’s the central garden court, the lavish interior and exterior spaces, the fabulous rooftop terraces (providing views of the LA basin and Hollywood Hills), and many a stylized flower that can be seen on the buildings various patterns along the roofline, columns, and walls.

When it was built, Hollyhock was conceived as a kind of “artist’s haven,” and included many rooms dedicated as studio space for actors and artisans. Now, in the present day, “surrounded by a modern theater and art galleries,” it’s even closer to that goal than ever before. It’s the perfect backdrop to learn more about LA’s history in relation to the arts, and the tour will likely delight. You can find out even more by checking out the brochure before your visit to Barnsdall and the Wine Tastings.

Liking the Idea of Barnsdall? Be Sure to Contribute

If you think the Wine Tastings and the good that Barnsdall does for the culture is great, be sure to support however you can. You can consider becoming a contributor, offering monetary support to the Barnsdall Art Park Foundation, which goes a long way to helping keep great events like the Wine Tastings running.

Alternatively, you could become a volunteer at the Hollyhock House. The Foundation needs people with an interest in art & architecture to help out with giving tours, and after you’ve seen Hollyhock in-person, you’ll likely fall in love with the structure.

A bit of fun never hurt anyone, a philosophy the Madrid exemplifies by design. Come take a look at the stunning ground, and you’ll see that the idea of fun is woven into the very fabric of this flourishing Los Angeles community. From the pool to the game room and beyond, the ways in which the Madrid can keep you calm and entertained beggar belief. Come here, and it’s a home you’ll not soon want to leave.